The solar eclipse of March 20th left us standing in a hybrid light. As if Space had closed in, to become more of itself – vast, absolute, the only act on stage; a conjuror steadily veiling the comfort of the apparent, better to reveal an alternative reality.

Moving with a twilight gait, the morning’s pulse beat towards pause. But this was no soft, twilight promise of leave-taking. For a moment, the illusion was stark, leaving us dislocated from what held us firm. A chilly pall plummeted, suspended on a weight of absence, and we were left enclosed in a box of mirrors; at the magician’s mercy – the spotlight that defined our world removed.

There was a dimming; a clammy, intimate drapery of air against my neck, seeping to the roots of my hair. Greyness stood silent and close – and yet, the rising morning still held high its bold, blue sky. Even with almost ninety per cent coverage here in South West England, the sun cast a steadfast light. When only a sliver of sun escaped the moon’s shadow, the gleam of its sword-edge – still assertive – sliced the day, and fitted it into an empty compartment of distant display.

We strained the solar eclipse through a colander for safe viewing of this cosmic event….

In that moment, the immense power of the sun – juxtaposed with the dead, cold shadow of its absence – made standing on this planet a sudden, deep-down awareness of utter dependence.

The birds – our solid allies during this dark turn of the cards – drained from the sky, seeking footholds. A pair of jackdaws, clattering on the tiles like a heave of surprise, landed on our roof. Shuffling comfort-near, they closed in on their own curiosity. Bills tilted skyward, they watched the eclipse, their eyes filled with perplexity. 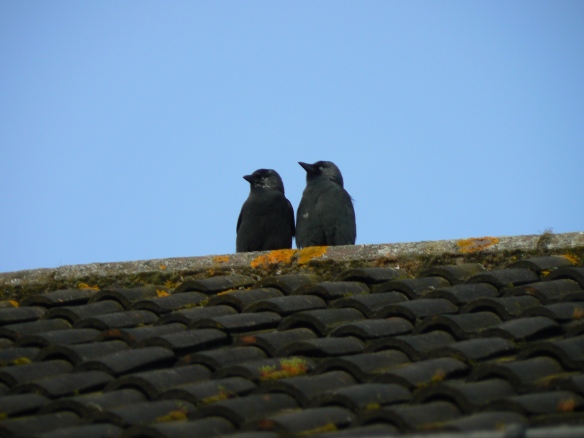 Earlier that morning, I had watched the jackdaws rise with the sun from a tree etched in sleep against the sky. Then, in pairs, they had spread around our street – roof by roof, chimney by chimney. They had been busy, vocal – prospecting old nest sites. We too had been busy; human and bird routines in motion, our hours prepared ahead of us to be filled and mapped by a compass of activity. And, above us, on a scale beyond full comprehension, a shadow was on its way; the moon travelling, unstoppable, into this moment of strange, drifting rootedness.

For me, the jackdaws’ reaction said it all. Their whole demeanour was like an astonished blink at a trick pulled out of the hat. They gazed skyward, watched each other, I watched them.

Jackdaws still puzzling as the moon’s shadow slips away, and the sky lightens…

And, together, we witnessed the unfathomable unpacked from a seemingly finite space. The familiar transformed into something more itself – and disturbingly revealed as utterly alterable.

And then, the moment passed. The waxing sun nudged most of the birds from their consternation – and they were flung skyward again; a whirl of beginning the day, once more.

But, for a while, the jackdaws remained – puzzling the sky’s strange riddle across the silver of their eye.

More than meets the eye:

Jackdaws never cease to fascinate me. Here are a couple of links to articles outlining research into how Jackdaws use their striking silver eyes, and their gaze, to communicate – and to entwine their understanding and behaviour with ours….

What the Jackdaw Saw – study shows birds communicate with their eyes (University of Exeter website).